Why Migrate to Regional Areas in Australia?

Major cities such as Sydney, Melbourne and Brisbane, have always been considered to be the most popular destinations for people intending to migrate to Australia from Singapore. Reasons like they are well-developed, vibrant, and job opportunities are countless, are only a few of the lines we normally hear during our initial consultations with our clients. The inflow of people has always been considered to be an advantage to the nation, but has also created a lot of pressure on these major cities.

To prevent the overwhelming influx from happening, the Department of Home Affairs, after careful considerations, has increase migration opportunities to regional areas. Aside from giving priority to migrants who are prepared to live and work in the suburbs, the government has increased the number of visa places to 11,200 meaning companies based in regional areas are looking to attract more skilled migrants to fill in vacancies.

How is it living in Regional Areas?

Regional areas are defined as any other states outside of Sydney, Melbourne and Brisbane. Under which circumstance, it is impossible to consider metropolitan cities like Adelaide, Perth or even Hobart as becoming regional. This is the concept that people has to understand. In fact, it can be the opposite if you actually consider the major cities represent the overcrowded, overpopulated, and over congested parts which are very un-Australia by way of its lifestyle.

Compared to main cities, cost living in regional areas is more affordable.  Regions have lower housing costs with higher standard of living, which is perfect for those newly granted migrants looking to establish a new life in Australia. Imagine being in a place where there is less population, less traffic, and plenty of space to move for your family. Not to mention that the standard of education and healthcare system are no different from those offered in major cities.

The future of Jobs in Regionals

With the perception that major companies are situated in metros, it is evident how the three big cities have been attracting migrant workers, especially in the financial and technology sector. Whilst the demand of skills is an important consideration, you have to take note as well that with higher demand comes higher competition. But, with lesser competition you might find regional areas having better employment prospects. Let’s move away from the perception that regional areas are just about trees, farms and seas that only jobs in the agriculture sector are available.

At Australia Immigration Specialist (AIS), we always believe that every choice is based on faith, as making decisions requires analysis and analysis must be done with enough knowledge. Exercise your good faith in deciding to kick start your Australia PR application, especially at times of uncertainties. But, as you contemplate on this matter, expect that AIS will work together with you in achieving your hopes of being able to migrate to Australia and start a new life there.

Categories: Magazine
Tags: migrate to Australia from Singaporemigrate to regional areas in Australia 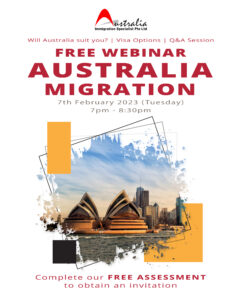 Migrate to Australia from Singapore: Upskilling amidst the Covid Pandemic

From 1 September 2021, Australia Immigration Specialist (AIS) shall launch a personalized Education and Career Counseling Services tailored to the personality type and interests of people intending to migrate to Australia from Singapore. If you Read more…