Australia now joined by 4.5 million people from other countries

Since the first Australian citizenship ceremony in 1949, Australia has welcomed 4.5 million people as announced this week by Chris Bowen MP, the Minister for Immigration and Citizenship.

Hitting the 4.5 million mark was a significant milestone and an opportunity for all Australian citizens to reflect on what it meant to be a citizen of this great country according to the Minister.

“Citizenship is the bond that holds our culturally diverse population together. This milestone also serves as a reminder of the role citizenship plays in building a strong and unified Australia,” Mr. Bowen said.

“Australian citizenship is unique. It carries responsibilities and grants privileges. It represents a commitment to our country, to our people, and to the values we all share.”

Mr. Bowen said the 4.5 million people to date who had chosen to become citizens came from more than 200 countries.

In 2010-11, almost 100 000 people were granted Australian citizenship, while the country reached the milestone of four million people becoming citizens in 2007.

“The first seven people to become Australian citizens in 1949 came from Spain, Greece, Denmark, Czechoslovakia, Norway, France, and Yugoslavia,” he said. Since then, in the 1970s we saw a rise in citizenship for people from Italy, Greece, and Lebanon, a steady stream of British-born citizens, and more recently people from China, New Zealand, India, Vietnam, and South Africa becoming citizens.

‘”This milestone shows the importance of citizenship to all Australians, whether we have become citizens by birth or by choice.” added the Minister.

If you are planning to migrate to Australia, email or call us at (+65) 6299 0246 for further assistance in understanding your visa options and plans for migrating to Australia.
You can also try our free migration assessment to let our consultants help you determine your eligibility for an Australian visa. 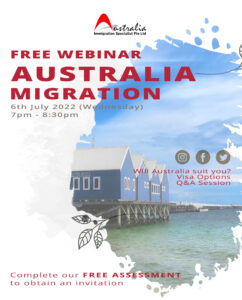